Thank you for your patience while we retrieve your images.

A fairy lake in Eryri (Snowdonia)...

The Gwragedd Annwn (literally, wives of the lower world, or hell) are the elfin dames who dwell under the water. The Gwragedd Annwn are not fishy of aspect, nor do they dwell in the sea. Their haunt is the lakes and rivers, but especially the wild and lonely lakes upon the mountain heights.

The son of a farmer on Drws Coed farm was one foggy day looking after his father's sheep, when crossing a marshy meadow he beheld a little lady behind some rising ground. She had yellow hair, blue eyes and rosy cheeks. He approached her, and asked permission to converse; whereupon she smiled sweetly and said to him, 'Idol of my hopes, you have come at last!' They there and then began to 'keep company,' and met each other daily here and there along the farm meadows. His intentions were honourable; he desired her to marry him. He was sometimes absent for days together, no one knew where, and his friends whispered about that he had been witched. Around the Turf Lake (Llyn y Dywarchen) was a grove of trees, and under one of these one day the fairy promised to be his. The consent of her father was now necessary. One moonlight night an appointment was made to meet in this wood. The father and daughter did not appear till the moon had disappeared behind the hill. Then they both came. The fairy father immediately gave his consent to the marriage, on one condition, namely, that her future husband should never hit her with iron. ' If ever thou dost touch her flesh with iron she shall be no more thine, but she shall return to her own.' They were married--a good-looking pair. Large sums of money were brought by her, the night before the wedding, to Dnvs Coed. The shepherd lad became wealthy, had several handsome children, and they were very happy. After some years, they were one day out riding, when her horse sank in a deep mire, and by the assistance of her husband, in her hurry to remount, she was struck on her knee by the stirrup of the saddle. Immediately voices were heard singing on the brow of the hill, and she disappeared, leaving all her children behind. She and her mother devised a plan by which she could see her beloved, but as she was not allowed to walk the earth with man, they floated a large turf on the lake, and on this turf she stood for hours at a time holding converse with her husband. This continued until his death. 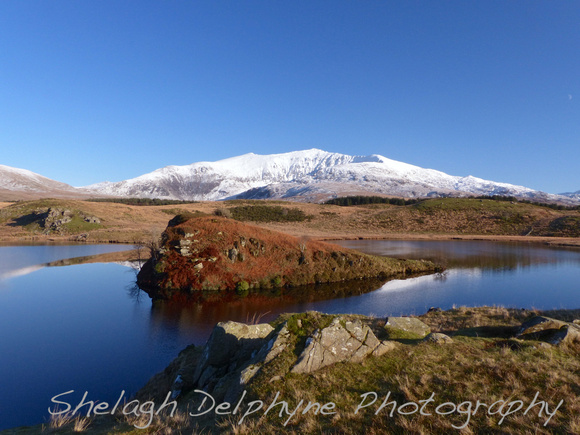